Behind the Scenes of Vampire Mob 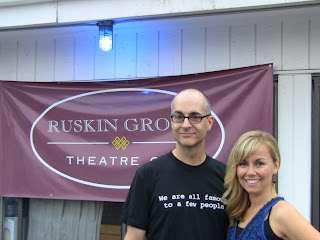 Me and Joe Wilson in front of the Ruskin Theatre

I lied.  I said Vampire Mob week was over, but it's not!  Until now, I hadn't posted my Behind the Scenes look yet, so Vampire Mob gets an extended week and an exclusive clip not seen in The Web Files episode.  So, let's take a bite out of what happened at the premiere. 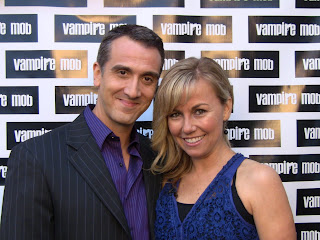 The awesome John Colella, star of Vampire Mob who kindly coordinated outfits with me for the premiere.
Joe Wilson, creator of Vampire Mob, has been in contact with me for the past three or four months giving me updates on his show and the launch date.  I knew he had a great cast the second the name Marcia Wallace was dropped.  Hello, Bob Newhart Show!  He also managed to wrangle Kirsten Vangsness from Criminal Minds for the series to help round out the cast with stars, John Colella and Reamy Hall.  While I didn't see anything beyond the trailer in the early months of our talks, I knew his show was going to be funny based on his digital short, Swear Police.  Anyone that hangs around me long enough knows that I rarely drop a four letter word, not because I am morally opposed to swearing, it just isn't in my nature.  So, when I saw the short, you got a lot of "Holy Cows!" out of me.  It really is funny. 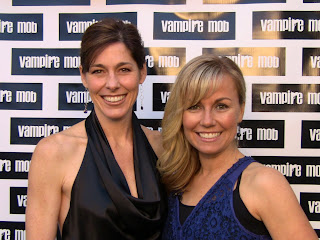 Reamy Hall and me posing away!
Lately, I have been on the red carpet more nights than I can possibly count, so it's nice to go to a different venue with a format that hasn't been done before. (This is also another great example.) The Vampire Mob premiere was held at the Ruskin Theatre by the Santa Monica Airport.  Different venue, check.  Stand-up comedy to open the night? Check.  A lobby filled with red candy, cookies, popcorn, and refreshing treats?  Check.  It was refreshing to go to a new space to cover a red carpet premiere and the Ruskin Theatre offered a nice, intimate room to check out the show.  We walked into the cozy lobby filled with every amazing calorie-laden food imaginable.  It was fantastic to be greeted with the smell of freshly popped popcorn, lots of beverage choices, and a pick-a-mix red candy smorgasbord. (Get it? red candy, vampires, blood).  Okay, as you can see, the way to my heart is through food.  The other aspect that set the tone was an opening act of comedy from four stand-ups before the screening.  When I originally heard that this would be happening, I thought, "Really?", but all four sets were hilarious and it warmed up the audience for the screening.  By the time we viewed episode one, we were raring to go. So, well done, Joe!
**UPDATE** Behind every smart man, there's an even smarter woman!  Let's give props to Kathryn Zaloga, Joe's "Consulting Producer and WIFE" from Hidden Garden Flowers.  She designed the entire look of the even and,trust me, the floral arrangement on the red carpet was killer. 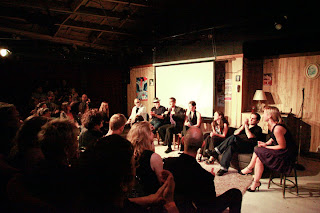 Q & A after the screening. Photo Courtesy of Agnes Magyari.
After the screening, I was asked to moderate the Q&A with the cast and crew.  We talked a bit about Joe's idea for the "Inner Circle" (Register here if you want to join and see the episodes before the rest of the world.) and following a view ransom model for Vampire Mob.  View ransom is a technique of holding the release of the next episode until the current episode has reached a set number of views.  For episode one, Joe set 5,000 views as his goal.  As I am typing this, episode two has been released to the Inner Circle, so they must be really close to releasing it to the masses.  It's an interesting way to gather buzz for your show and I can't wait to see how it plays out for Vampire Mob. 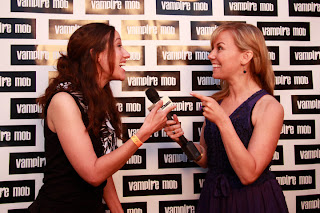 My favorite photo of the night.  What is going on here?  Just ripe for a caption, no? Interviewing Elizabeth Beckwith. Photo Courtesy of Agnes Magyari.
Finally, I love that people are now rehearsing The Web Files regular feature "Your show in 10 words or less description".  Joe was ready for me, so I made him do it in seven words which turned into nine words even with a Mother-in-Law abbreviation. (MIL)  I also learned that it is tough to be a vampire.  You are awake when everyone is asleep, you have a desire to bite people for food, and you give up every delicious meal for blood.  I laughed at some of the answers from the cast when they talked about what they would miss if they were a full-time vampire.  I decided that Elizabeth Beckwith is my new BFF because she would miss cheese, she plays a chiropractor to a vampire in the show, but all she really  wants is to go to the dark side for Season 2. That's my kind of gal!  Check it out in The Web Files episode below:
And, as promised, a Red Carpet Closet Exclusive, check out what Joe's shirt really means.  You see it in the series, hear it from the creator.

Again, thanks for watching!  Feel free to leave your comments on Vampire Mob below.  I would love to hear your thoughts on the view ransom idea.  Discuss, go!
Posted by Kristyn Burtt at 11:12 AM