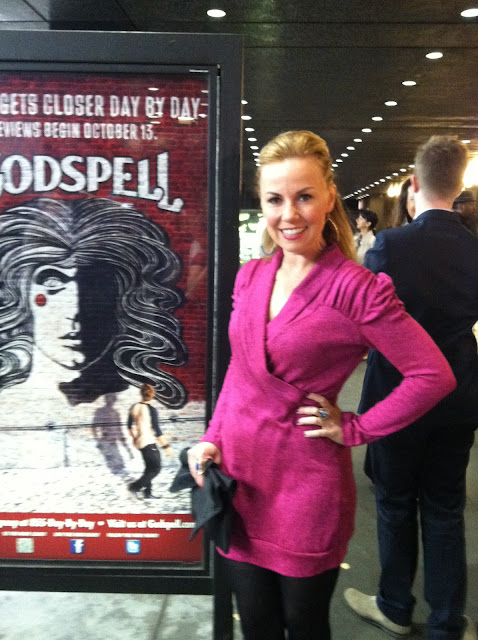 I'm reveling in all of the excitement from Monday's opening of Godspell.  It was such a thrilling night and it was a great opportunity to see how far the cast had come from the press rehearsal I attended in late September. My mom AKA "Grammy" was my hot date for the night, so we got all gussied up and hit the Great White Way. Here's the inside scoop on the evening and don't forget to buy your tickets to Godspell.


I made sure Grammy hit her best red carpet pose, hand on the hip! 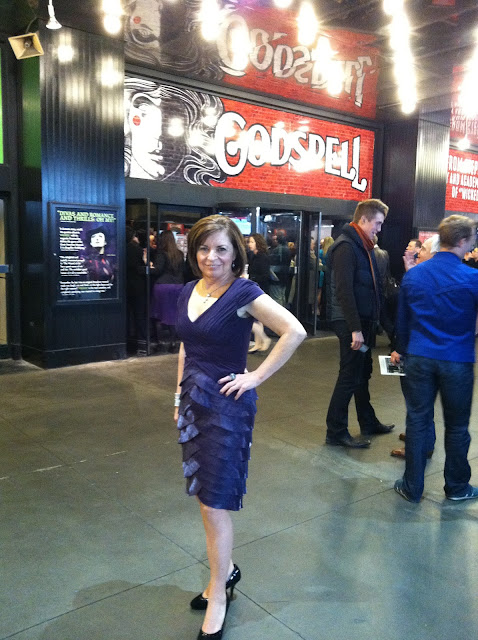 So this is a photo from our seats.  Yup, we were that close--front row and center, thanks to Ken Davenport.  The show is at Circle in the Square, so it's theatre in the round. 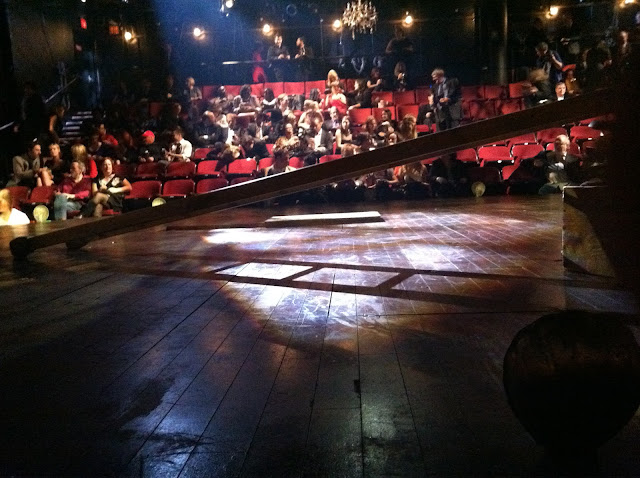 Grammy and I onstage at intermission enjoying some "wine" with the cast.  Don't miss this when you go to see the show. 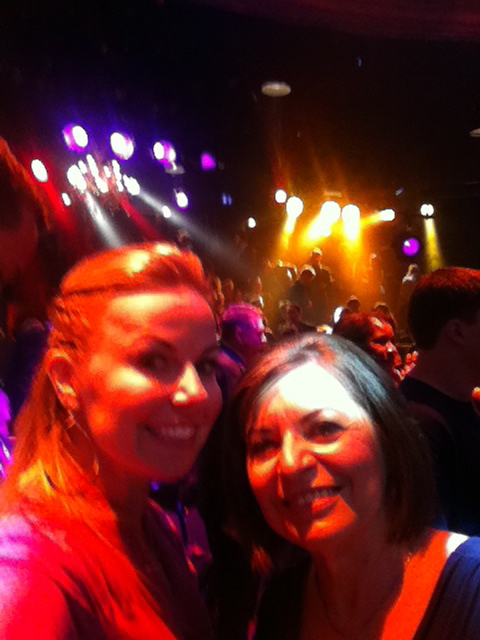 Just after the final curtain call, the cast huddled for a moment onstage.  This cast is incredibly close and you can tell they genuinely enjoy working together.  This is one of my favorite pictures from my NYC trip. 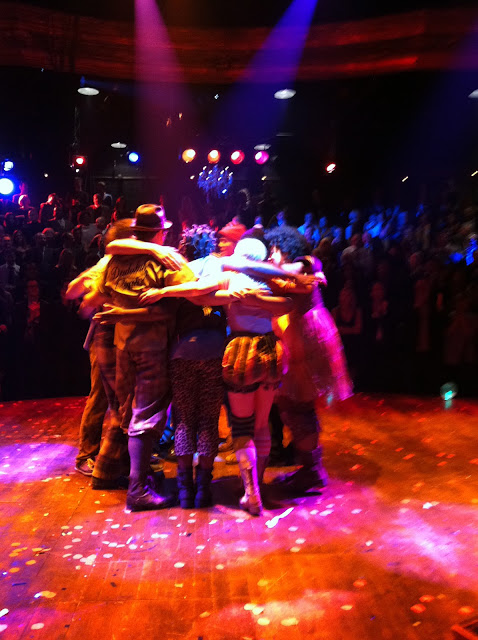 The row of Canadians! If you look carefully, you see Victor Garber and Martin Short in the photo.  Many of the cast member from the legendary Canadian production were there:  Paul Schaffer, Martin, Victor, Eugene Levy, and Andrea Martin. 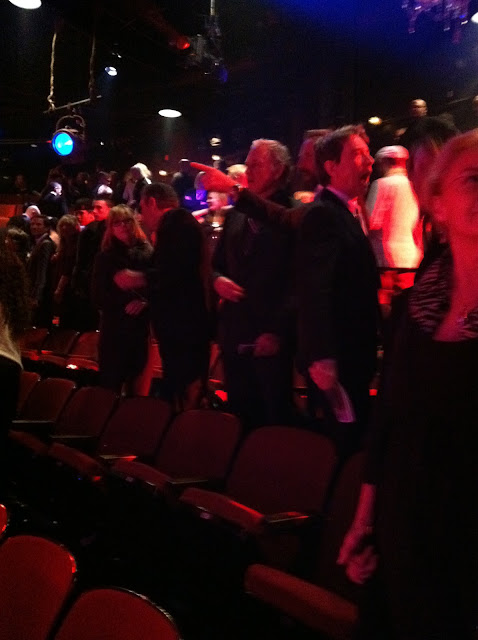 The stage is littered with glitter and confetti by the end of the show. 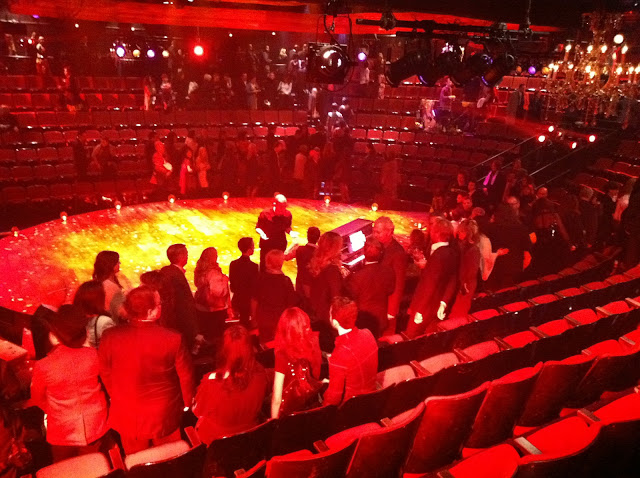 Olympic gold medalist and my favorite figure skating commentator, Dick Button. I have the pleasure of knowing his awesome daughter, Emily, and I love that the Button sass runs in the family 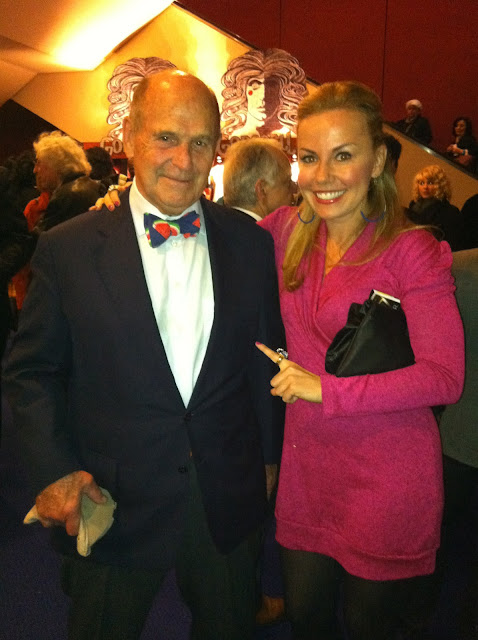 Director, Daniel Goldstein with me after the show.  We spent several summers together at Stagedoor Manor because I am the dork who attended musical theatre camp. (Yes, I was that kid.) 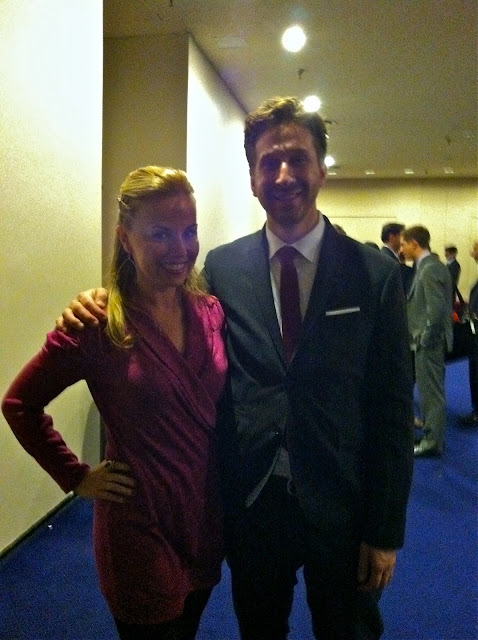 Pointing out my name on the People of Godspell banner.  Yep, I am an investor and my name is right next to Dick Button. Sweet. 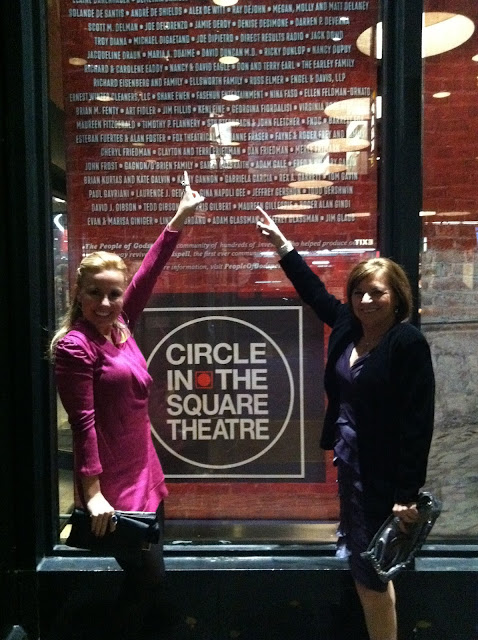 Scream!! It's a Jonas Brother!  Yes, Kevin and his wife, Danielle, came to support Anna Maria Perez de Tagle in the show. 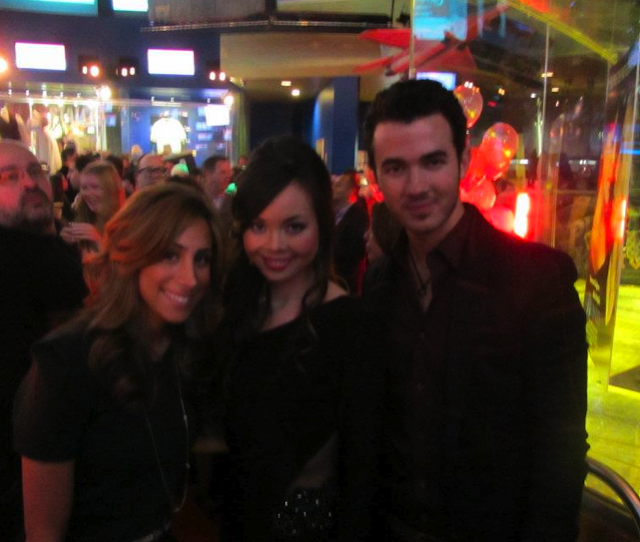 You know I wouldn't miss this cupcake. 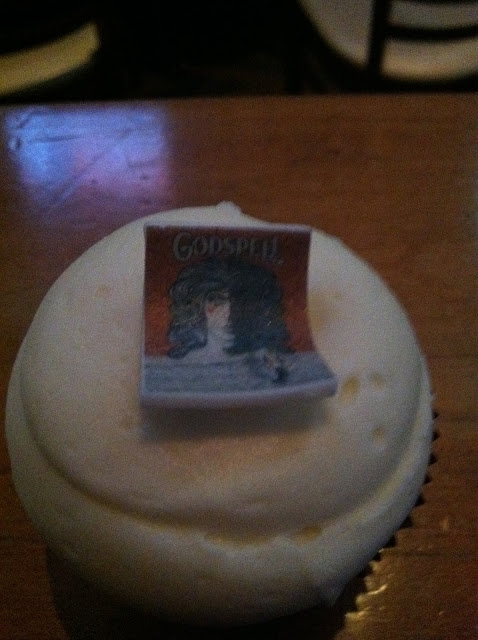 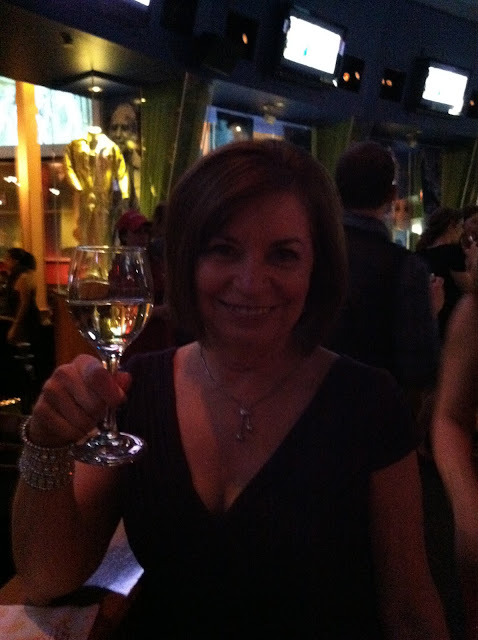 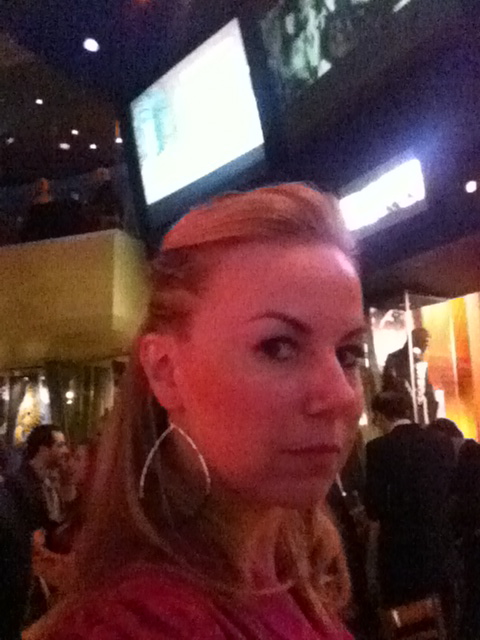 I love this shot.  I've known Ken (producer of Godspell) forever and I am so happy for his success. 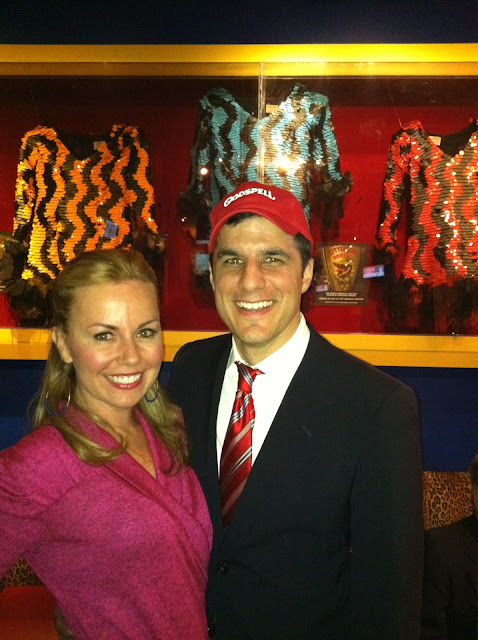 Seriously, could Anna Maria be any prettier?  I interviewed her earlier this year at the Kids' Choice Awards gifting suite.  Sweet girl and she's absolutely luminous in this production. 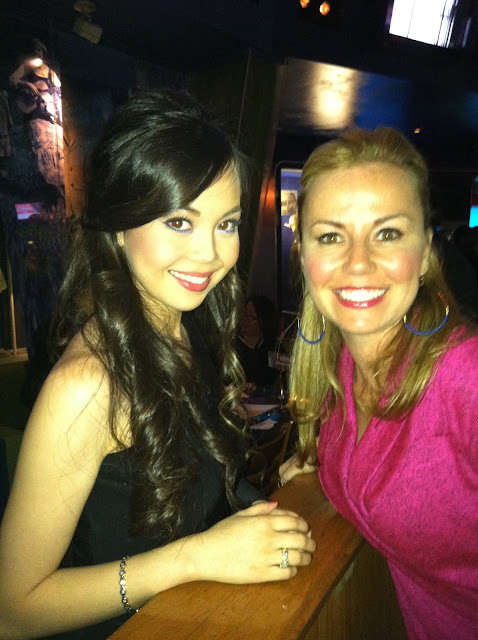 Getting our party on at Planet Hollywood! 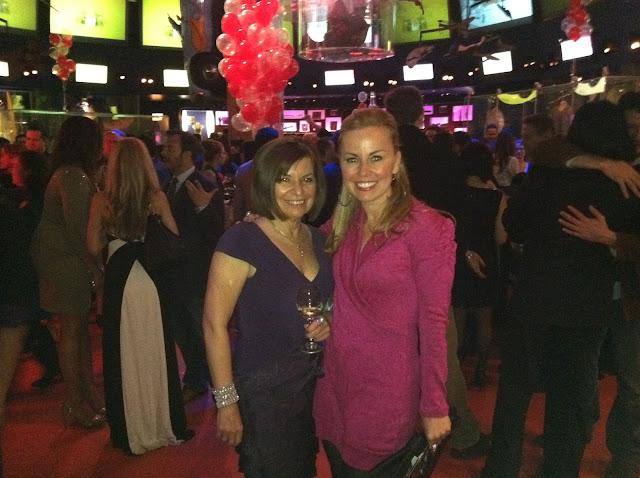 There was glitter everywhere. I found it in my hair the next day and it was stuck to our skin.  Notice the logo of my iPhone case reflected on the glitter....it's the Godspell logo! 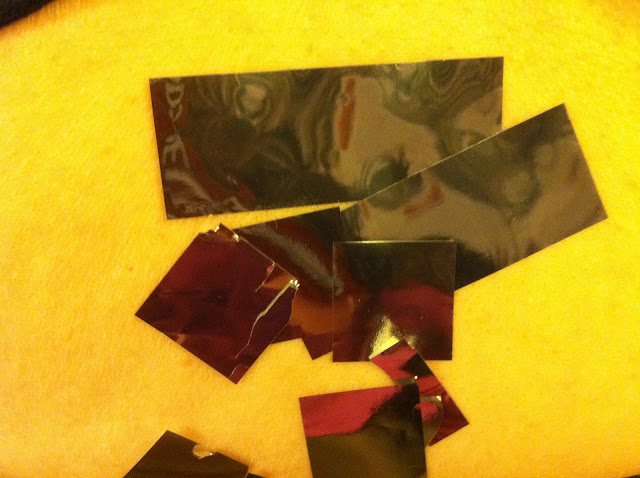 The opening night gift.  It was a brick.  Um, I had to fly home with a brick.  If you ever want to travel with a brick through TSA just know that you will endure a bag check and an explosives test. 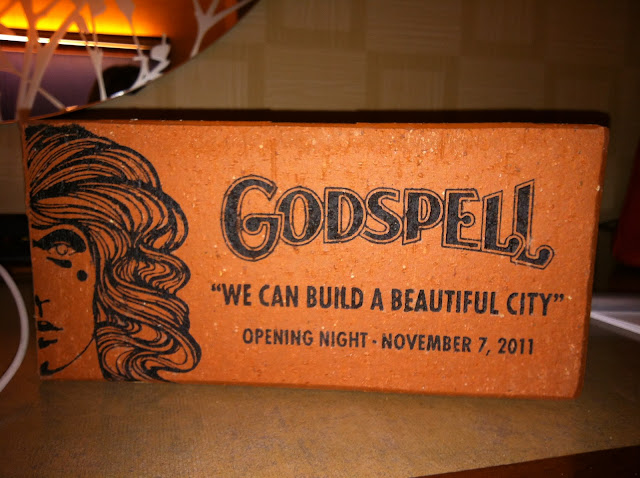 Posted by Kristyn Burtt at 7:46 AM