Albrecht, Diaz, Buckley, Pollak, and Who?

So, the Streamys nominations are out and everyone is gearing up in preparation for the show. At The Web Files, we have some nominee interviews coming your way and of course, we will be covering the red carpet on the big night. I know a lot of the ladies out there are looking for the perfect dress and I will admit, I have hit the gym a bit harder lately. While I am thrilled to be nominated for Best Web Series Host, I have to chuckle because I think at least three nominees said, "Albrecht, Buckley, Diaz, Pollak, and Who?" I am humbled by my fellow nominees because they inspire me to think about the levels The Web Files could reach if we continue to put in the hard work and dedication to the web space like Alex, Zadi (My admiration for Zadi and Steve Woolf can be seen in a prior post.), and Michael. And then there's Pollak, yes, Kevin Pollak. Um, when are you ever going to be nominated against Todd Hockney from The Usual Suspects? That's enough to keep an Oscar Geek like me happy. (The movie won for Screenplay and Best Supporting actor for Kevin Spacey in 1996). Kevin's show has inspired an LA Times article and brought even more attention to the web space. With these four fantastic nominees, I am more than okay with being the "And who?" Congratulations to my fellow nominees!

By the way, I think Michael Buckley needs to know that I am the biggest figure skating and gymnastics geek ever, so I think we should be friends....especially if he wants in on the best (and secret) gymn/figure skating gossip site ever. (Yep, there's a site for everything and it confirms that I am a geek!) So, Michael, I am in NYC before the Streamys, coffee or cocktails are on me if you want to meet up!

**UPDATE** Michael heard my call and he has agreed to meet up with me while I am in New York! I love the power of the internet. I can't wait to dish about figure skating and gymnastics with my new BFF....whom I hear is a pretty decent figure skater himself. 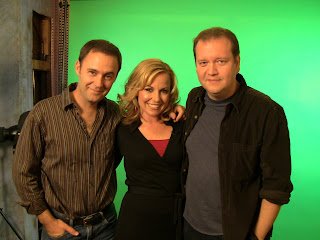 Also, we will be featuring some of our previous Web Files interviews from shows that are up for Streamy Awards as a part of our Weekend Web Watch. Our first weekend showcased Safety Geeks:SVI which is nominated for Best Visual Effects for Tom Konkle, Thor Melsted, and Mike Smith. It is a great episode for the IAWTV members to take a first or second look at since we go on set and check out what it take to build the composites for their show. Check out the episode here: Safety Geeks: SVI 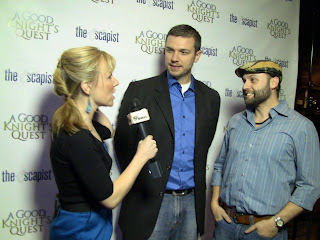 Our next episode for our Weekend Web Watch honors Compulsions in two parts. An interview with creator/writer, Bernie Su, and producer, Michael Tohl. Part two focuses in on the red carpet premiere with the cast, crew, and distributor, Aimee Carlson of Dailymotion. Compulsions garnered 4 Streamy nominations for Best Actor: Craig Frank, Best Writing (Drama): Bernie Su, Best Director (Drama): Nathan Atkinson, and Best Drama Web Series. I first heard about Bernie's idea for a series over Thai food, so it feels like I have been around since the beginning with Compulsions. While it is only Thursday, you can get a head start with our Weekend Web Watch here:
Part One: Compulsions
Part Two: Red Carpet
Posted by Kristyn Burtt at 9:32 AM