Behind the Scenes of The Web Files Buzz, Episode 3 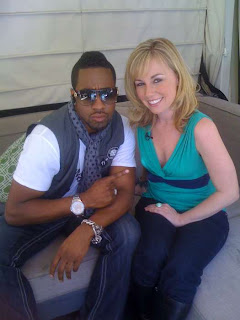 Yes, this was the Demi Moore version of The Web Files Buzz. I had a fantastic case of laryngitis that kept my voice an octave lower for this episode. So, I wasn't feeling my best, but I was pretty excited about the day we had with Jaleel White and Todd Pellegrino on the set of their new web series, Fake It Till You Make It. Many of you grew up with Jaleel as Urkel on Family Matters as a part of ABC's TGIF lineup and it is always fun to find out where your favorite child stars are years later. Jaleel managed to get a film degree from UCLA, starred/produced/wrote for UPN's Grown Ups, and made his mark in the web series world in 2009's Road to the Altar. (And I bet you didn't know he also wrote for Family Matters when he was 19 years old.) Not bad, right?
Since many of you asked, I am here to say that Jaleel was a lot of fun to talk to that day....kind, smart, and easy to interview. I think he is an actor who will bring more attention to the web space with his name and his talent. Oh, and the location for a web series didn't hurt. We shot on location, poolside at the Viceroy Hotel in Santa Monica. 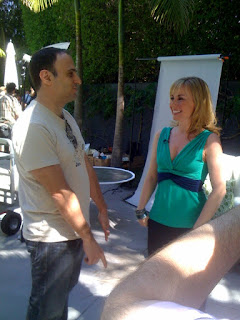 Jaleel also brought in the big guns to direct his series. Todd Pellegrino knows exactly what he is doing as an Emmy nominee for ESPN's Mayne Street. Todd brings a NY sensibility to an LA web series that may perhaps end the great NY/LA web series divide. Hopefully, combining the two coasts with all of their talents will prove that we can all just get along. Todd also promised a funny script with this series, so I am looking forward to the cast of characters who are hustling to make in LA in the only way LA "friends" know how. One great thing to point out from my interview with Todd was his focus on making sure all 8 episodes were self-contained based on the way viewers are currently watching web series. It may be a good device for content creators focusing on comedy to utilize in the current web series climate. 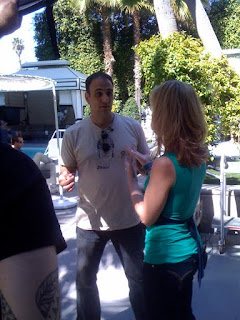 I tried really hard to get scoop on the star cameos. While I did get them to drop Wayne Brady's name, new media publicist, Gabriel del Rio, was carefully placed off screen to make sure Jaleel and Todd kept all of the secrets close to the vest. Gabriel is a really good secret gatekeeper, next time, I will have to distract him on set! However, I did learn from Jaleel's recent article in The Huffington Post that UFC Fighter, Rashad Evans, will be making a cameo, so this series is definitely going to have that LA feel of eclectic, quirky characters. Bring it on!
**Update** I don't know how I missed it, but Mathieas kindly pointed out that Debbie Allen is making a cameo as well. Jaleel mentions it in his article. I love Ms. Allen, so that is a huge WIN for me as a viewer. 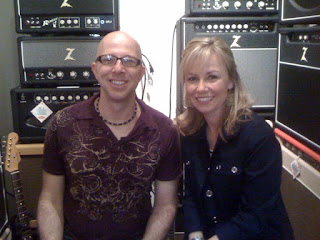 After our visit with Jaleel, we raced down the street to Truetone Music to interview film and TV composer, Rob Gokee We are going to continue to feature some of the additional elements that go into a making a web series, so I am glad we were able to grab Rob since music is an important component of any story. He's been quite prolific in the web series world as of late with the upcoming SOLO the Series, End Result, and current web series Fallen, under his belt. Rob pointed out some of the challenges of music composition with the obvious time factor being every creator's greatest enemy and friend all at the same time. This segment was also a great reminder about the importance of networking. For Rob, that meant utilizing Twitter to meet and court creators of content. All of his work from web series has come from 140 characters and it was the inspiration for his new book, In The Belly Of The Fail Whale. So, for all of those who dismiss social media, take a lesson from someone who has seen the merits of the whale. 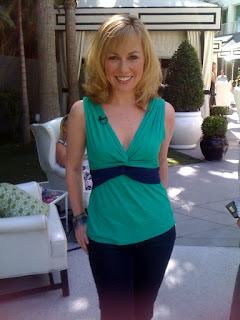 Finally, a few public answers to several emails that have come in starting off with my shirt. Since I have been in and out of town so much, there wasn't time to plan my wardrobe for this episode. Thank you to all who wanted to where I got it since I was sick that day and I wasn't feeling my best. At least I know I looked okay on the outside, that was a confidence booster that I needed. The shirt is from Bebe and it is 3 years old, so I am sure it is out of circulation. I also committed a grand fashion faux pas as this is the second time I have worn it on camera. It was actually purchased for a QVC appearance with Stila Cosmetics in 2007. That should also answer all of the questions as to whether I was sick or not for this episode. Yep, all of my travels caught up with me and I came down with the crud. But thank you, Mathieas McNaughton, for thinking it sounded hot because, boy, did my throat hurt.
A big "thank you" goes out to Gabriel del Rio for inviting us to the set of Fake It Till You Make It. He's been a great friend to The Web Files and we appreciate his continued support.
If you haven't checked out this week's episode, watch it here: The Web Files Buzz, Episode 3.
Next week brings a sit down interview with one of the belles of the web series ball, Taryn Southern. Be sure to check out our new episode next Wednesday.