Behind the Scenes of Showbizzle! 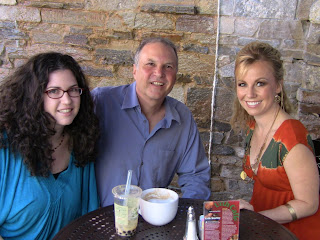 Ah, what does a classic 90210 fan do when you meet Charles Rosin, the Brenda Years Executive Producer/Show Runner? Geek out! I was thrilled when Gennefer Snowfield orchestrated the introduction and eventual interview with Charles and his daughter, Lindsey. They have created an unique entry into the web series world called Showbizzle. We had the opportunity to shoot at Urth Cafe in Beverly Hills, thanks to Charles. It's always a treat to shoot The Web Files in a location that is identifiable to the web series. I honestly think that some of our strongest shows feature the series locations because it becomes a subtle marketing tool by branding the show on another level. 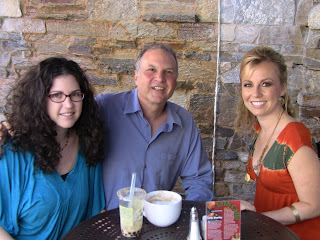 Uh, does this photo look any different than the one above? We sure are consistent!
I will go on record to say that this was our quickest interview ever. Normally, our shoots last 30-40 minutes. We had about 18 minutes to get it all on camera because Lindsey had a last minute conference call with one of the studios. As a young writer, this is a GREAT problem to have. Showbizzle has become a great launching pad for Lindsey and I think actors should take a closer look at this series. The Rosins are huge supporters of young talent in Hollywood and the Showbizzle community pages truly demonstrate that. If anyone understands what it is like to work with young Hollywood, trust me it is Charles. He helmed the hottest show of the early 90's with Shannen Doherty, Jenni Garth, Luke Perry, and Tiffani Amber-Thiessen during the height of its popularity. Lindsey is on the other end of the spectrum where she sees the highs and the lows of the entertainment industry since she is in the early part of her career.
The Rosins are a dynamic father-daughter team aiming to take the interactive part of Showbizzle to the next level. So, head on over and visit Showbizzle, check out their monologues, learn a tidbit or two from an industry veteran, and get engrossed in the world of the bizzle. With some of the stories, you just may be able to relate. My favorite quote from the show defines Hollywood to a tee: "There's always someone hooking up, screwing up, breaking up all while chasing their first big break........Heard any good stories lately?"
On to the gossipy bits: While this question did not make the final cut, I asked Lindsey if the characters of Lydia and Jackson were based on real-life reality show "actors". She would not admit anything on camera, but I really think it is the ultra-annoying Heidi and Spencer AKA "Speidi". Also, is Lindsey the narrator, Janey, and is Janey actually Lindsey? You will have to wait until all 23 episodes play out, but I think there is autobiographical moment or two in the show. And, yes, I did talk to Charles about the 90210 days off-camera with Shannen, Jenni, Tiffani, and the boys, but it was all off the record. Ask me about it over a cocktail, maybe you will get a tiny morsel of juicy 90210 dish.
If you missed our interview with Showbizzle, just click here: Showbizzle.
Posted by Kristyn Burtt at 7:00 AM