Behind the Scenes of MWG Entertainment's Camera Obscura 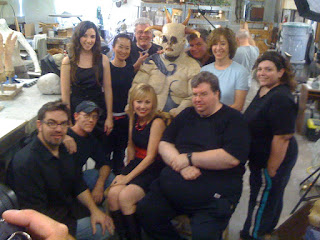 Earlier this year, I became a special effects makeup geek. I had the privilege of attending the Dick Smith tribute at the Academy of Motion Pictures hosted by Oscar winner and An American Werewolf in London legend, Rick Baker. After that evening, I was officially hooked on the art of makeup and special effects. When the opportunity presented itself to shoot MWG Entertainment's Camera Obscura interview at the Obscure Artifacts studio, I was giddy. 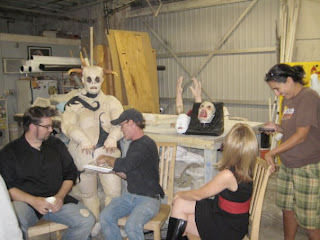 The series first came to my attention via the woman who does it all in the web series industry, Andrea Ball. She knows everyone and she has her finger on the pulse of the web series world. Sandra and I were looking to do a Halloween episode and we thought Camera Obscura would be a perfect fit once we saw their creepy trailer. So once we worked out all of the details with publicist extraordinaire, Gabriel del Rio, we were on our way. 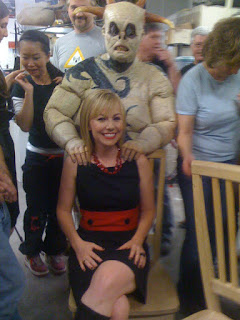 I felt like a kid in a candy shop walking into Obscure Artifacts. It is fascinating to see all of the demons, creatures, and chopped off arms laying around. I am not sure I picked the right outfit for the day though. A special effects studio is a little messy and, of course, I choose a dress more appropriate for cocktails than demonic creatures.
The interview went by so quickly because we had so many people to talk to! Director Drew Daywalt truly represents his Twitter bio, "Nice guy, creep films". As a creator of short form horror videos for Fewdio, it is hard to imagine all of the horrifying images come from such a kind man. Visually, I think all of you are really going to be terrified by Camera Obscura from the Linda Vista Hospital location to the dreary sepia look of the show, it promises some true meat for horror fans to sink their teeth into. It is the anticipation of what is about to happen that is truly terrifying. During the interview, Drew gave a terrific explanation of how horror can work well in under 3 minutes and in a web series. And while I understand why so many new media creators look to take their web series to different platforms like film and TV, it was refreshing to hear that Drew created this show solely for the web. 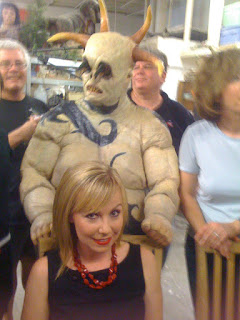 I was thrilled to finally sit down with MWG Entertainment's Director of Distribution, Sarah Evershed. We both seem to be at the same places at the same time, but we never seem to find each other at the new media events. I think Sarah demonstrates the strength of MWG Entertaiment's slate of new shows and their focus on women....whether it is a comedy like Road to the Altar or the horror genre with a strong, female lead. MWG Entertainment is making web series for you, ladies!
Finally, we have Jeff Farley, the special effects creator for Camera Obscura and the owner of Obscure Artifacts. If you have a fascination for the behind the scenes creations, this is the man to follow. With an impressive resume filled with notable productions like Serpent and the Rainbow, Scary Movie 2, and an Emmy nod for his work on Babylon 5, Jeff brought the six demons that Drew created to life. While the time frame for the production might have been tighter and shorter than some of his prior big budget work, the demons are going to haunt you. I don't think we gave Jeff his full due because he shared so much with us in regards to his work on Camera Obscura. We are tossing around the idea of doing a supplemental episode with all of the extra Jeff Farley footage, so stay tuned for a future announcement.
Of course, I cannot forget Corpulence. As creepy as he is in person, I think he was flirting with me. Sassily played by the talented Paul Hungerford, I never knew what he was going to say next. In fact, I think Corpulence is a bit of a diva. Paul was a total trooper in the Corpulence suit. I am sure he lost half of his body weight from the interview alone, but he gave The Web Files some of the best sound bites yet. From the beak-like eyes to the chubby belly, the work that went into Corpulence is pretty incredible. I was completely freaked out by the clicking sound the beak makes when in operation. And yes, there is a wizard behind the moving appliances, it has to be controlled by another special effects artist who kneels behind the suit. It takes a lot of work to be scary! 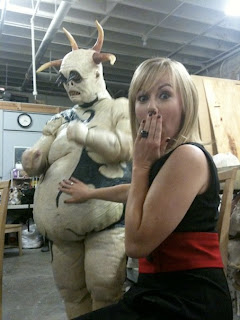 I hope you all have a truly spooky and safe Halloween. If you haven't caught our episode yet, watch it right here: Camera Obscura. And here, you will find the blooper reel of our beloved Corpulence: Corpulence.
Posted by Kristyn Burtt at 7:25 AM