The Art of Breaking News: Ryan Seacrest and Julianne Hough 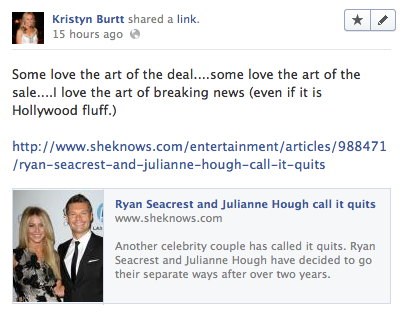 Yesterday, a big story broke at the end of the day and I talked about the thrill of breaking news on my Facebook page. When I say "big", I am not talking about important news that affects the world, I am talking about Hollywood fluff.  That's a part of my job, so that's what I am referring to here.

On Friday, at the end of a work day and the news cycle, it was announced via "sources" to People magazine that Ryan Seacrest and Julianne Hough had broken up.  I hopped on and wrote the breaking news article for SheKnows here as well as linking it to my Facebook page after my copy editor polished it up and published it. (I lucked out on the timing. I had to write one more article for the day just as the news was breaking.) The reactions to the breakup were interesting; everything from "the contract is up" to "I was rooting for them as a couple."

It's fascinating to me how the public interprets what publicists put out there and what the truth actually is. I usually read between the lines on the stories because it is Hollywood and it is all smoke and mirrors.  So, let me break down a few things about the Seacrest/Hough story.

And before anyone calls me heartless, I will go on record to say that breakups are tough and they are even tougher when they are public.

Also, I've interviewed Julianne twice now (here and here) and I think she is a total kick-ass awesome kind of gal. 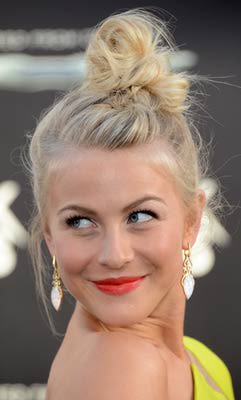 The Details
1.  Ryan is 38 years old, Julianne is 24 years old.  There is a big age difference between the couple.

2.  They both have huge careers. No one is busier than Ryan Seacrest, no one. Julianne
spent several months promoting Safe Haven. She has two other movies coming out this year. Her career is no.1 at this stage of the game. Julianne is young and she has to strike while the iron is hot.

3.  Even though there has been no official statement from the couple's rep. Trust me, this is PR 101. You release a story at the end of the day and at the end of the work week. It lessens the impact of the news since less people are tuned into their TVs or the internet.  (Massive PR 101 strategy is releasing the news on a holiday weekend. See the Bethenny Frankel divorce announcement for an example of how it is done.)

4.  The reason the news was released?  You can bet it relates back to the story about Julianne and the theft of her jewelry making headlines earlier in the week. Why was she staying at a friend's apartment when she lives with her boyfriend?  The media started sniffing around and the couple knew they had to make a move.

5. "Sources" gave the exclusive to People.  People always does celeb-friendly articles.  They keep it light, tell the public they are still friends, etc. The source was most likely their publicist.


A few people have asked me if they will get back together?  My guess is that this is the end of the line for the couple. He's married to his work and she has a hot career to handle right now.  They were both supportive of each other's work though. In fact, Ryan was hanging out with the entire Hough family at the after party for the Safe Haven premiere.

As for the rumors about a dating contract because one of them is allegedly gay...I've never had any confirmation about those rumors in comparison to someone who might have starred in Saturday Night Fever, Grease, and Pulp Fiction.  So, until I hear otherwise...I think it's a case of age, heavy work schedules, and life in the public eye.

Now, that I've broken it all down for you. I want to hear your thoughts! Hit me up in the comments below: