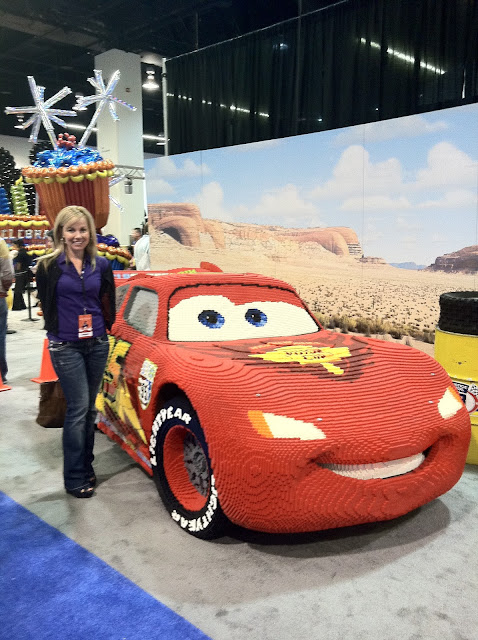 It's not a hard task when I am asked to cover the D23 Expo down in Anaheim:  Disney?  Pixar?  Disney World?  Disneyland?  It's billed as the "ultimate Disney fan event", so count me in! On Saturday morning, I was able to attend The Walt Disney Studios presentation which gave the audience a taste of the films to come now through 2014.  Fans lined up as early as 6AM to get in line and wait for a seat in the Arena.  I rolled into the convention center at 10:15 AM with my Press Pass and I was escorted to a seat within minutes.  As a press member, I was thrilled with the VIP treatment all day, but I know the long lines and chaos of some of the events had a lot of the attendees grumbling.  It's something for the D23 planners to consider when most fans are accustomed to the golden Disney customer service. 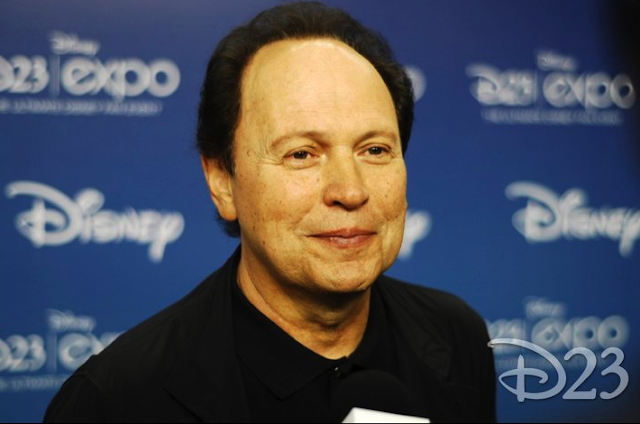 Billy Crystal received a standing ovation when he came out. I wonder if 2012 Academy Award Producer, Brett Ratner is listening?

Once we were all settled in, the program kicked off with a highlight reel of the movies that were going to be presented to us.  Tim Burton's Frankenweenie, The Muppet Movie, and The Avengers received the biggest cheers as these are all highly anticipated films in the Disney lineup.  John Lasseter was on hand to present the Disney/Pixar animated slate and this is when D23 started rolling in the stars from Jon Cryer for Planes (If you like Cars, you are sure to like Planes, right?), Sarah Silverman and Jack McBrayer for Wreck-It Ralph (an 8-bit video game bad guy), Kevin McKidd and Kelly McDonald for Brave, and Billy Crystal for the prequel to Monsters, Inc called Monsters University. You knew they were buttering us up for box office dollars.  What interested me the most was the humor behind Wreck-It Ralph and the beauty and strength behind the story of Brave, which features Pixar's first female main character. (It's about time, guys!)  Expect to see Wreck-It Ralph in theatres November 2, 2012 and Brave will be hitting the big screen on June 22, 2012.  They also teased us with two untitled films:  one for Holiday 2013 about Dinosaurs and another feature about what takes place in your mind for Summer 2014.  (Yes, what happens in your brain.  You can't make this stuff up.)  The Pixar segment wrapped up with cupcakes in honor of Pixar's 25th Anniversary.  It was a very Oprah-esque moment as cast members came out with boxes of cupcakes for the full arena.  You get a cupcake and you get a cupcake and you get a cupcake! 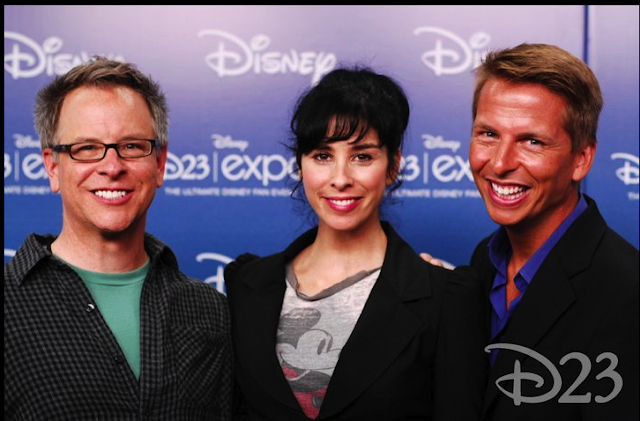 Walt Disney Studios' feature fare was up next with a lengthy and rather awkward presentation about the March 2012 film, John Carter.  Andrew Stanton, Oscar winner for Finding Nemo and Wall-E, brought out Willem Dafoe, Lynn Collins, and Taylor Kitsch to describe four long clips about the movie.  Lynn and Taylor looked uncomfortable up there and read their sound bites straight from the TelePrompter giving rehearsed pitches about the film.  It was clear Disney had invested a lot of money in this film and they really want us to see it.  Unfortunately, the response was rather lukewarm in the audience.  Livening up the audience was the presentation for Frankenweenie described as a film about a town where "Transylvania meets Burbank" in a timeless story of a boy and his dog told in a way that  only Tim Burton can achieve.  The film is all stop motion and in black and white with a Danny Elfman score, could this film be any more delicious?  We have to wait until October 2012, so tide yourself over with the Tim Burton Exhibit at LACMA in the meantime. 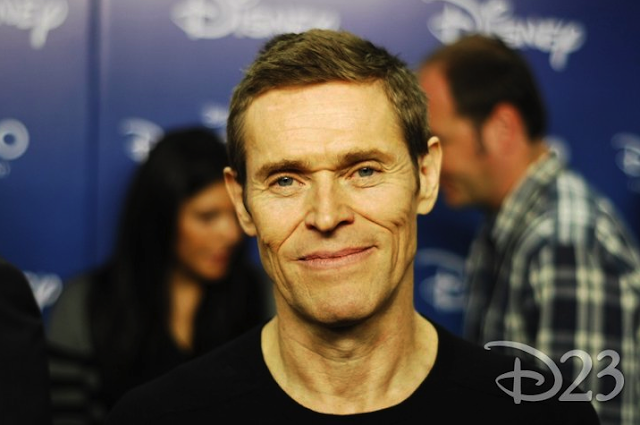 Jenifer Garner was brought out next to talk about The Odd Life of Timothy Green which will be perfect family fare.  Garner was positively sweet in her role as a Disney spokesperson, but I do wish the questions were less rehearsed and more spontaneous.  Sometimes the Disney suits are not as engaging as John Lasseter who is able to balance the creative and the corporate a bit better than others.  Next up was Oz (March 2013), the Sam Raimi directed film that just began principal photography on July 21st in Detroit.  Yep, Detroit is Oz, kids, in case you didn't know.  The stellar cast includes James Franco, Rachel Weiz, Mila Kunis, and Michelle Williams and Disney promises the audience a story we haven't heard from The Wizard of Oz legacy. 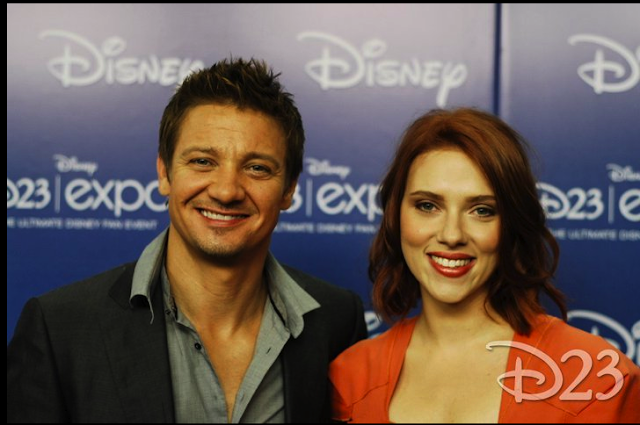 Jeremy Renner and Scarlett Johansson for The Avengers.

Finally, the two films the audience was waiting for:  The Muppet Movie and The Avengers.  I was more excited about the former since I am tired of superheroes.  I know I am in the minority on this topic, so I will give you a few highlights on The Avengers.  First up, Jason Segel, Kermit, and Miss Piggy make an appearance and introduce two clips from the film.  The longer musical clip to "We Built This City" by Jefferson Starship proved to me that the silver screen has been missing the Jim Henson heart for some time. This movie will be huge and I will be the first in line to buy a ticket.  The Avengers clip was action-packed filled with stars, superheroes, and the perfect fare for Marvel fans.  Kevin Feige, President of Marvel Studios, introduced Scarlett Johansson, Robert Downey, Jr, Jeremy Renner, Chris Hemsworth, Tom Hiddleston, and Cobie Smulders to an arena filled with screaming fans.  Joss Whedon and several cast members were still shooting back in Cleveland since there are two weeks left of principal photography left.  They then showed the same exact trailer again.  I wasn't sure if this was for the audience or for the cast who stayed on stage to watch the clip.  I do know that it was at the end of a 2 hour and 45 minute presentation, so a lot of the audience was antsy to move on to the next event and pick up their cell phones after keeping us in a media blackout for that time period. 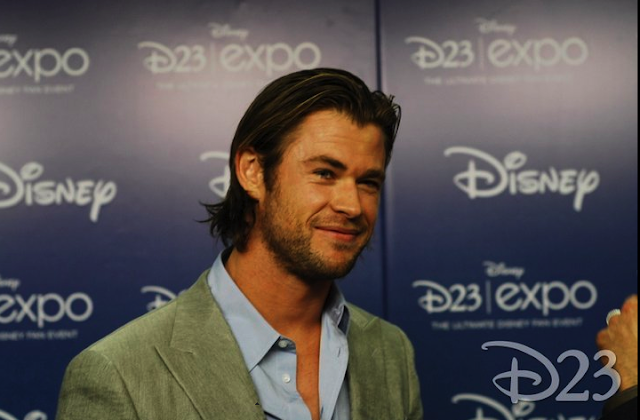 Chris Hemsworth of The Avengers

Overall, Disney has a strong slate of films through 2014, but I will be fascinated to see how well John Carter performs at the box office given the lackluster response from the D23 audience.  I will be back tomorrow to give you some of the Expo and Archive details and photos from the show floor.  In the meantime, I want to hear what film you are excited about, feel free to comment below!