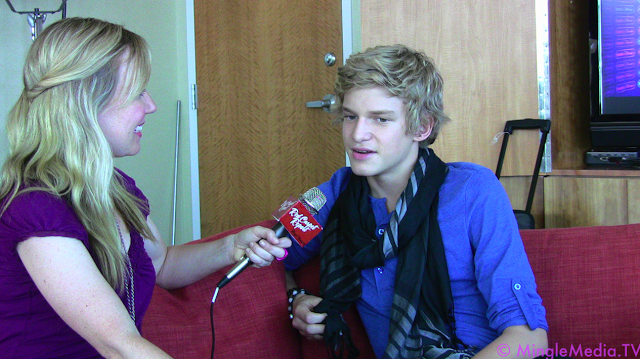 I cannot believe I am even writing about Season 18 for Dancing With the Stars here on my blog since we just wrapped Season 17, but it looks like inquiries are starting to go out to some celebs. Cody Simpson started the rumor mill churning big time on Friday with a series of tweets:

so, I just received an offer to be on Dancing With The Stars in March. what do you all think? do you want to see me on TV every week?
— Cody Simpson (@CodySimpson) December 14, 2013

it's during the time I'll be in LA recording my next album, so it wouldn't prevent me from touring and seeing all of you. tweet me thoughts.
— Cody Simpson (@CodySimpson) December 14, 2013

wow, looks like you all think I should do this. definitely helps me when thinking about my decision. I'll let you know after the holidays.
— Cody Simpson (@CodySimpson) December 14, 2013


A few of you asked me who Cody was. Yes, he's part of the Disney chain. He actually comes from the Disney Radio side and did some mentoring work on Disney's Next Big Thing. I have interviewed him three or four times and he's a doll. He really blew up this year because he was the opening act for Justin Bieber. Yeah, no big deal.

Here are some of my Cody Simpson interviews:
Next Big Thing
Let It Shine premiere
The Biggest Loser appearance

If Cody does decide to do the show, I'm thinking Witney Carson or Lindsay Arnold would be a great partner for him since they both fit into the right age demographic. Witney and Cody? Lindsay and Cody? Which one would you prefer?

What I can tell you is that Cody has a rabid fan base of teen girls. ABC would love to have him and it sounds like he wants to do it. It would also be a big "get" for the show.

Let me know what you think about Cody Simpson on DWTS in comments below.