Fire at Cobo Hall at NAIAS 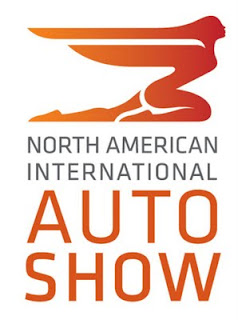 If you were following my tweets or the news today, you might have heard about the fire at Cobo Hall at the North American International Auto Show in Detroit. At about 1:20 PM today, a muffled voice commanded over the PA system to evacuate the building and file out in an orderly fashion out the front doors. The PA system sounded like it had not been used since the 1955 Detroit Auto Show so, there was a bit of confusion as to what was happening and what the actual message was telling us. Once we received confirmation from the Cobo Hall security guards, we grabbed our bags and jackets and headed out of the display. I decided to grab a few snapshots on my iPhone on the way out of the building. As we walked towards the Ferrari display, we smelled the burning plastic and saw the smoke........ 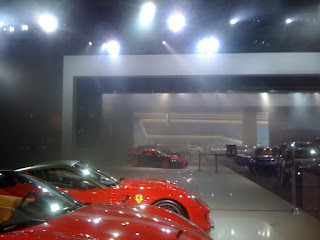 As we approached the front doors, the smoke got thicker and the smell clearly indicated an electrical fire. Thankfully, the crowd moved in an orderly fashion. No one pushed, everyone was calm, and we moved to front doors in a matter of minutes. The only thing that really struck me as odd was the fact that people waited to get their hand stamped on the way out, creating a huge line of people trying to exit. Um, there is a fire and acrid smoke in the building, please move along. We moved to the right towards Audi where the fire occurred and headed out to an open exit. By the way, we never heard a fire alarm..... 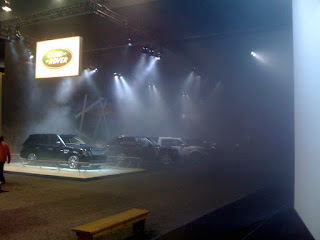 Security let everyone stay in the lobby for quite a while even as the fire trucks pulled up and the firemen assessed the damage. Information on what was happening and if the show would reopen was sparse and often wrong. One security guard would say the building was closed for the day and another would tell us to return in an hour. Many of the auto show teams decided to gather across the street at Zoom Cafe and wait out the evacuation. Once it was determined that the show would be closed for more than an hour, a group of us ventured to one of Detroit's hidden gems.... 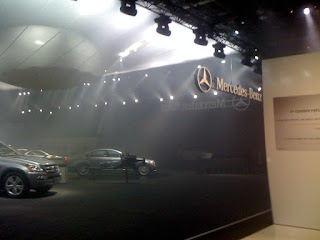 Yes, that would be Slow's. If you must wait out a fire emergency, do it at the best BBQ place in the MidWest. I happily gorged on St. Louis Ribs, Mac and Cheese, and Green Beans to pass the time. We even managed to top it off with Ryba's chocolate fudge. Yep, a high caloric day! 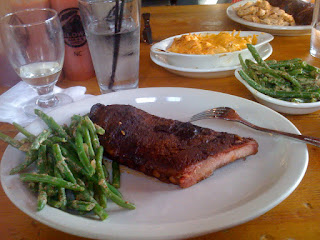 While we returned to the convention center at 4:45 PM in time for the supposed 5 PM open, Cobo Hall was not ready for the public. The teams were allowed into their displays, but we did not see the public until close to 6:15 PM. Honestly, I am not sure the show should have reopened. We came into a hall that had a strong stench of burnt plastic and all of the fire doors open to the outside. So, the temperature had dropped below 50 degrees in order to blow out the smoke and odor. It was not the healthiest environment to work in, but we plowed through the rest of the shift with headaches and stinging, burning throats. I am not the only one who questioned the reopening of the show, check out The Booth Babe and her take on today's emergency: The Booth Babe. The good news to end this drama was that no one was hurt and everyone exited the building safely. The show reopened and the crowds poured back into to see 2010's offerings.
Before I wrap up here, I want to call out the Detroit Free Press for pulling my photo off of Twitter and not crediting me. I took all of those photos on my iPhone on the way out the door. I don't mind that they used it, but responsible journalism goes a long way--especially when you are a legitimate media outlet.

**UPDATE** A big thanks to Jalopnik and Auto Blog for crediting the photos back to me. I also want to thank the readers of Jalopnik for thinking of creative spoofs for my name. I got a good laugh out of it and the comment section is worth a read.

**SECOND UPDATE** My photo continues to be linked to other publications even to international automotive media: iCarros.

**THIRD UPDATE** Another international view of the day's activities from Brazil: Notícias Automotivas.

**FOURTH UPDATE** Roman Mica of TFLcar.com kindly linked to my article and photo. Be sure to check them out too: TFLcar

Posted by Kristyn Burtt at 7:14 PM