Behind the Scenes of Dorm Life 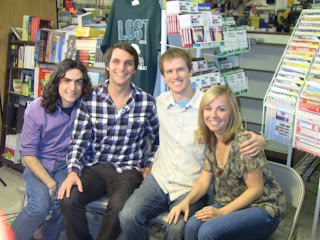 When I say in the cold open of this episode, "Everyone asked me about this show", I wasn't kidding. It was my dog sitter that continually asked me about doing an interview with Dorm Life which led to a friend on Facebook, a web series producer at New Media Vault, and a group of web series stars at a holiday party all asking about Hulu's #1 rated web series. Well, it's here and it was fun! It was actually my friend, Annie Mureau, who put me in touch with Jordan Riggs over at Attention Span Media. It was a long process since they wanted to wait until there was news to deliver. That is always a smart strategy with media and interviews (take note, web series producers), so we waited until the launch of their Season 1 DVD. 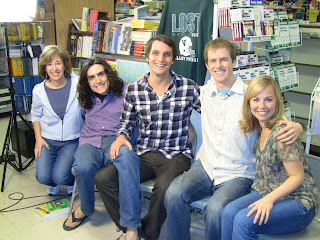 Sandra secured our fantastic school book store location over at LA Valley College at the end of their school semester. People were turning in their old text books for cash and we were hitting the books to find out more about the creators of Dorm Life. Chris Smith, Jack De Sena, and Brian Singleton proved to be an entertaining interview. They were funny, engaging, and demonstrated why their show is so popular. Dorm living is a rite of passage here in the U.S., it is that first bit of freedom we get as a young adult. Some of the stories that come out of dorm living may frighten parents, but, man, those were some fun times! That is exactly why Dorm Life is successful....solid writing about an experience we all can relate to.
They started their project while they were at UCLA and it became a great calling card for all of the young writers and stars. Remember, they have up to 14 writers on this show, so it is truly a collaborative process. They have created two successful seasons landing them at the top of Hulu's most watched web series. Will they make it to Season 3? That is still a big question mark for them and I didn't get any definitive answers from them because I truly believe that they don't know. All of the fans will just have to wait or just let them know what you want, let your voice be heard. It is the fans who demanded longer episodes from Dorm Life and they delivered in Season 2, so give the guys a shout out for Season 3. 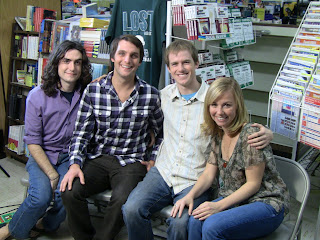 One of my favorite moments that didn't make the episode is that Brian Singleton's mom has taken it upon her self to be cast as Marshall Adams' mother, the character played by Brian. She will respond on social media sites about her "son" when viewers make comments about Marshall. Not only is she new media savvy, but she's funny. Guess we know where Brian inherited his humor.
Finally, a quick shout out to my friend, Ali North, who saved the wardrobe day with my awesome shirt that she gave me for my birthday. It was our last shoot for 2009 and I had nothing to wear, until she dropped off my present the night before. Thanks, Ali!
If you haven't seen our episode of Dorm Life, check it out here:
Posted by Kristyn Burtt at 8:13 AM