Michael Jackson's Star on the Hollywood Walk of Fame 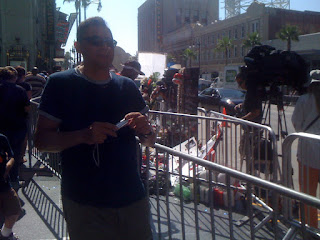 Hey Everyone,
Well, the video above was shot four days after Michael Jackson's passing and I am stunned at how the
frenzy continues. Fans and the media are flocking to his star on Hollywood Boulevard. It is a mess
of security guards, large metal gates containing the crowds waiting to view the star, and media vans.
Many are trying to capitalize on MJ's death with posters and t-shirts which you will see in the video. It truly
is an unbelievable sight. I also had to drive by the Jackson family's street again today and I was dumbfounded
that the media trucks had spread to the boulevard. The entire family is ensconced in the compound now, so
I guess everyone is looking to get their money shot.
Sigh. I do have to ask: Where was everyone the last 15 years? Fans? Media? Is he worth more dead
than alive? Sadly, I am finding the answer is "yes".
Reporting Live from Los Angeles,
kb
Posted by Kristyn Burtt at 8:37 PM